There’s only one photo that captures some of the reality of our Kilimanjaro trek. Unlike all the others, it wasn’t posed for with big, happy smiles because we didn’t know it was being taken. In it, I’m sitting on a rock, my rucksack thrown in front of me, on a steep volcanic slope. My head is in my hands and although I’ve got sunglasses on, you can tell I’m staring into the middle distance as if searching for meaning. In front of me, my pal Mark is grimacing at the effort of removing something from his rucksack.

At that point, I’d run out of water about an hour before, which was challenging as we still had several hours of hiking downhill to our camp. I say hiking but at that point it was more like surfing on our feet down a steep slope of loose and dry scree. Which also meant my mouth was full of dust. I had a carton of orange juice in my pack but decided against drinking it having seen my brother vomit immediately after drinking his. Orange juice is not what you want to down on an empty stomach. Not at almost 6,000 metres altitude, when you’re dehydrated. So I sat and grimaced as the sun baked me in my layers of technical gear.

Six days earlier, we were trekking through rainforest on the first leg of our trip. It was tranquil. My brother, Mark and I we were chatting excitedly to each other and to others in our group who we’d just met. Above us, jungle wildlife flitted through the canopy, including a sighting of some monkeys.

By the end of that day, we were camping on the Shira Plateau, an expanse of arid rock and brush. Ahead we could see the endless slope and peaks that we'd be facing over the next few days but our tents faced the other way, out over the lip of the plateau which was right above cloud level. We were right next to thick white clouds heavy with moisture from the plains below. It felt as if I could run off the edge and bounce across the cotton wool pillows. As the sun set behind them, I was lost in a daze at the sight.

The following day, the route became less scenic but still dramatic. Parts of the mountain are like lunar landscapes, arid slopes with rocks and boulders scattered across them. Much of the trekking was a steady uphill, sometimes followed by a descent following the ‘climb high, sleep low’ approach to help us acclimate to the altitude. As the week progressed, things got tougher. On some days, we trekked through relentless rain and drizzle, arriving at camp to spend the rest of our days in our tents trying to keep ourselves and our kit dry. The combination of Mark’s stinky feet and my altitude induced flatulence meant my brother had to run a grim gauntlet when he crawled into our tent to join us for a post-dinner game of cards.

On one evening, I came out of the communal tent where we ate dinner as a group, and stopped in my tracks. Ahead and above me was the most star filled sky I had ever seen, the sort of sky I’d seen pictures of or watched in films but had never truly believed it existed until now. The sky seemed more gleaming stars than blackness, and they actually shimmered. Most breathtaking of all was the Milky Way, striped through the middle of the sky like the dusty contrails of some bizarre spacecraft. There were colours I had never seen in a night sky before, planetary objects dotted around. I stood, starting upwards for a long time until I noticed most of the rest of the group were standing alongside me doing the same, stunned by the mind bending nightscape.

Spirits generally stayed high amongst our whole group, thanks in large part to a couple called Mike and Liz, both 60 and semi-retired. Experienced hikers, they were relentlessly positive, helping to create a great mood amongst our group of mixed ages, gender and experience. It was no surprise later in the week that they were the first to summit, a good hour ahead of everyone else.

In the two days before summit day, we all began to suffer. Sleep became impossible due to the altitude and the food worsened as our supplies began to perish. Pretty much everyone had some stomach problems, due also to the altitude, and I had a particularly memorable encounter with a long drop (not for sharing). Mark, meanwhile, had developed a hacking cough, a strong indicator of potential altitude-induced fluid on the lungs. The guides spent a lot of time examining him before finally deciding he could continue to push for the summit.

And so summit day arrived. We left our base camp at midnight, the intention being to summit as the sun rose around 07.00 and then leave plenty of time to get back to base camp and continue on down the mountain. For the final push, it was just our group and our four guides. Wearing our warmest clothing for the -8C temperatures, we set off in the pitch black, only able to see what our headtorches illuminated in front of us.

We were walking on gravel-like scree which seemed to give way under our feet, sapping us of energy. Sleep deprived and now feeling the effects of altitude well over 5,000 metres, I was counting less than twenty steps before I had to stop and gasp for breath. It felt absurd to feel this feeble and it was then I realised the week leading up to this was simply preparation for this push, and why Kilimanjaro does have a significant proportion of people who don’t reach the top (15% on our Machame route).

The group naturally splintered as our paces varied, until eventually it was my brother, Mark and me with our guide, trudging relentlessly through the darkness. A few hours in, Mark was starting to feel the effects of his cough and looked dead on his feet. We were concerned, until the guide grabbed Mark’s rucksack, swung it over his own, and began to give Mark a gentle push uphill, all the while singing gently in Swahili. At that moment, the sun began to break on the upper slopes, painting them in the dawn shades of purple, pink and then orange. Later, Mark would recall that he almost shed tears at the beauty of it all.

We reached Stella Point, a small shelf located around 200 metres below the Uhuru peak. For here, it was a traverse around the crater rim to reach the infamous summit sign, which we could almost see. Several climbers from other groups, stumbled past us looking like the walking dead, some clearly unable to continue. I tried not to pay too much attention as I summoned my own reserves for the final push.

From here, I felt like I was walking in treacle with a severe lung infection. I was now down to just ten steps before needing to stop and gasp for breath for a few minutes. A walk that would normally take around 30 mins took over an hour and I eventually reached the summit, barely glancing at the view. Instead, I pulled a piece of discarded metal sheeting to flat ground and collapsed on to it. I’d barely touched it when our guide pulled me back up by my hands, telling me “We can’t rest here.”

We took our obligatory photos and for the first time, appreciated the incredible views across the plains on one side and back towards the glacier on the other. The sky was cloudless and the sun now began to heat us up rapidly as we unzipped a layer or two. Although our day was for us to summit early and leave plenty of daylight, we couldn’t dawdle at the top - we were all exhausted and the longer we stayed, the longer and harder our descent.

Every step of the descent felt like things were getting easier and easier. At least at first. Most of this will have been psychological but on the steeper sections, we were eating up the descent and heading back into denser air. By this point though, we’d all run out of water which was made worse by the gravel scramble, a kind of out of control run-cum-dance down a steep hill of scree. Dust was thrown up everywhere, clotting my mouth with nothing to wash it out. And so it was I found myself sitting on a rock with a grimacing and staring vacantly.

We became separated and I vaguely recall arriving back at base camp, stripping off to my base layers as I walked towards my tent and discarding my layers. I pitched forward onto my sleeping bag and was asleep before my body touched the ground.

From there, the rest of the descent over the next day and a half felt like a victory march. We laughed, joked, swapped stories and hearing everyone's experiences, I realised just how tough and brutal the mountain could be at that altitude. I also had a bizarre introduction to reiki after an inexplicable agonising back spasm that left me unable to walk. Liz, a reiki practitioner, found the pain point without me guiding her (I was too busy groaning) and without touching my back, heated the area with her hand until the pain dissipated. I’d been a skeptic when she told me about reiki earlier in the week, but no longer. Her hand was red hot and my back was pain-free. At the time, it seemed an inexplicable experience. 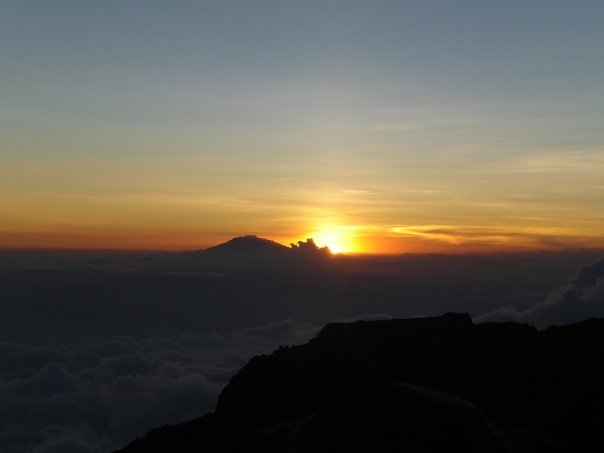 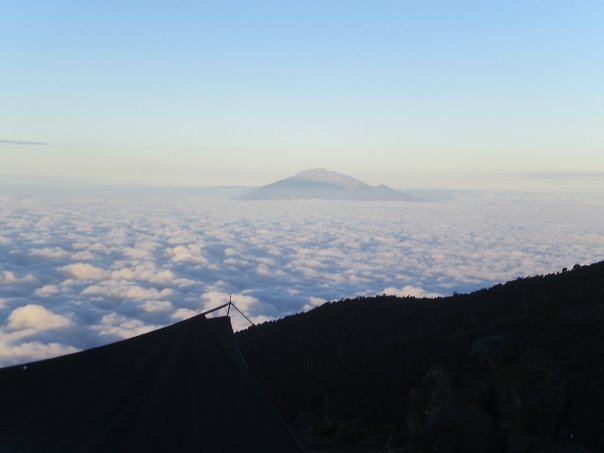 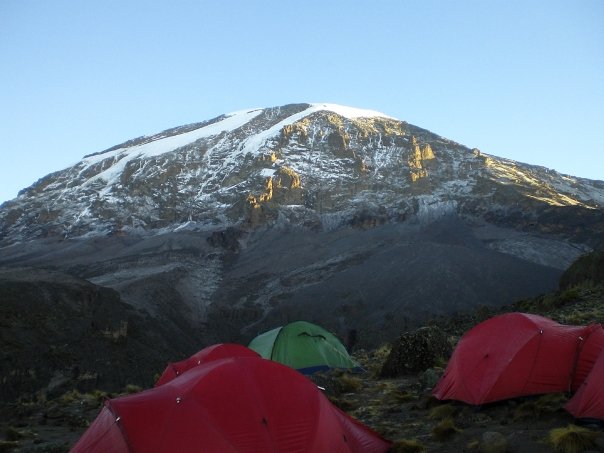 Back in the sweltering heat of Moshi, we enjoyed a few bottles of Tusker, haggled for a few souvenirs with the super friendly locals and gazed back towards the majestic, snow-capped peak overlooking the town. Kilimanjaro will also be a special place for us, first-hand proof that the high mountains hold magic, brutality and majesty within them, alluring and dangerous in the same step.

Go find your pocket: Our trip was organised by Adventure Alternative, founded with a strong focus on employing locals & run by Gavin Bate, a lifetime adventurer: https://www.adventurealternative.com/climb-mount-kilimanjaro/